The umbrella world of Knirps is an exciting place but it’s not always easy to understand the lingo. Here’s a little umbrella lexicon to shine some light on the specialist terms. 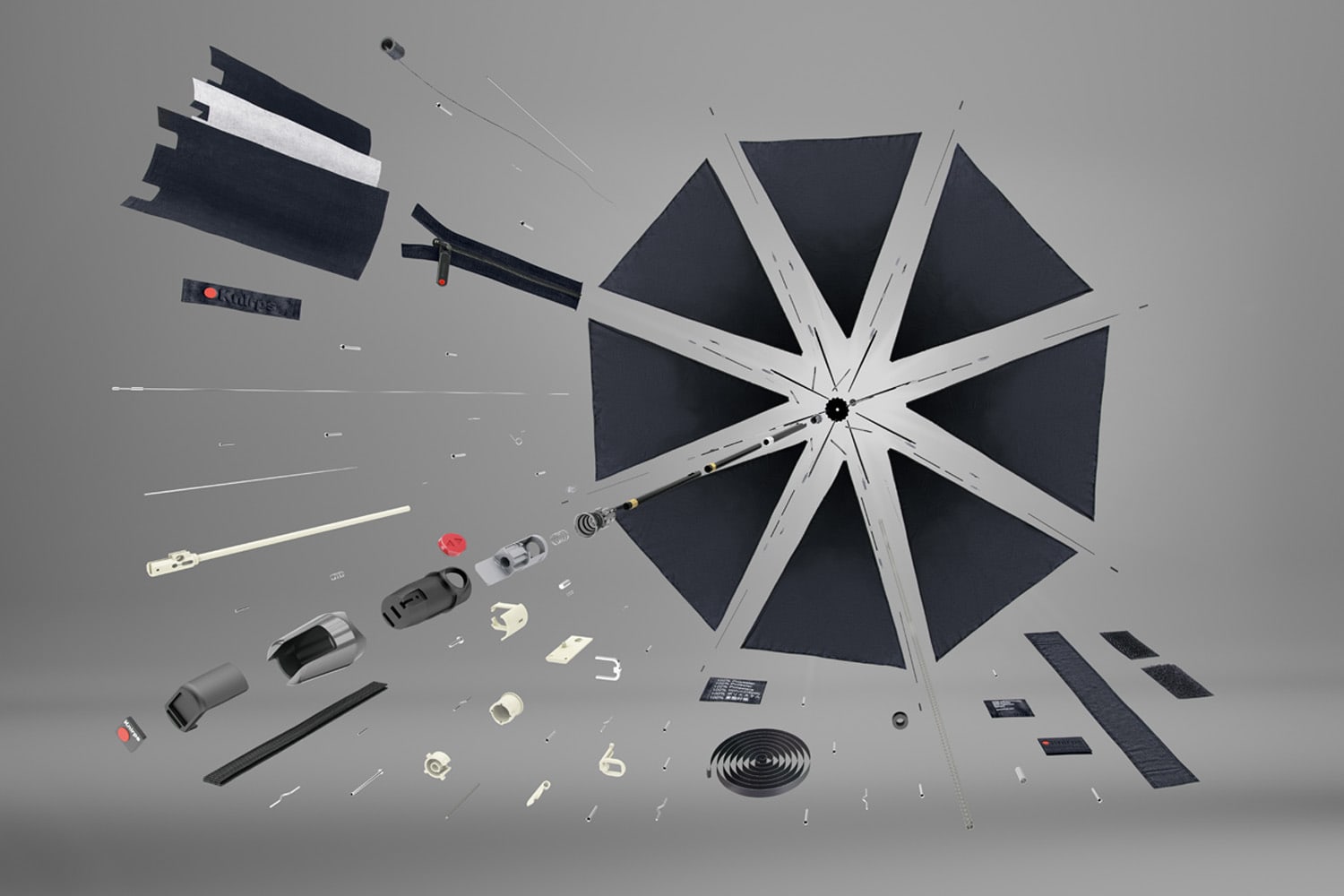 A is for Automatic

Many Knirps models open automatically at the touch of a button. Gentle pressure from one hand is all it takes to make the canopy pop.

B is for Ball spring

In ancient China, umbrellas were made from silk or wax-covered paper and used for providing shade. The size and colour of the umbrella could tell you something about the status of its owner – for example, only the imperial family were allowed to have red or yellow ones. Today, most of the world’s umbrellas are manufactured in China.

The practical duomatic function on many of our Knirps umbrellas allows you to open and close the umbrella at a touch of a button.

E   is for Economical

Knirps umbrellas come in a wide range of sizes and styles, so there’s something for everyone, no matter what their budget.

The frame includes all parts of the umbrella except the canopy and handle. Whether it’s a 6, 8, or 10-part frame is based on the number of stretchers. Most long and folding umbrellas have 8-part frames. For mini umbrellas, 6-part frames are preferred because it makes the umbrella more compact. Umbrellas with 10-part frames have exceptional durability.

G   is for German engineering

Our high-quality Knirps umbrellas are backed by state-of-the-art German engineering. Ever since our company was founded in the 1920s, we’ve been an industry leader in product innovations – many of them patent protected, so they’re unique to the umbrella with the red dot!

H   is for Hans Haupt

In 1928 Hans Haupt, a mining assessor from Breslau, started a revolution. He was wounded in the First World War, which made it difficult for him to carry a walking stick and a traditional long umbrella at the same time. Necessity being the mother of invention, he developed the telescoping pocket umbrella. Because it was so small, he called it “Knirps,” which means “little guy.” The search for a manufacturer for this new model was hard – not many were able to see the potential of the little umbrella. But when he finally found a partner in Bremshey & Co, it quickly became clear that a true success story had begun.

I  is for Impermeable

The materials Knirps uses for its umbrellas are coated with water repellent on the outside and an impermeable layer on the inside. So they not only keep you dry, they also dry out very quickly.

J  is for Japan

Japan is the country that buys and uses the most umbrellas per capita. The Japanese don’t just use umbrellas in the rain; they also carry them for protection from the sun. Knirps thinks this is a good idea – that’s why our summer designs are coated with a special UV shield.

Knirps was the first brand to focus on telescopic (i.e., folding) pocket umbrellas – and they’ve had resounding success worldwide for over 90 years!

L  is for Long umbrella

The long, or stick umbrella is the traditional model. Unlike so-called pocket umbrellas, its frame does not fold up.

M   is for Mini umbrella

These are the smallest pocket umbrellas or folding umbrellas, with shafts that telescope multiple times and stretchers with several joints.

N is for Notch

The notch is the point at the centre of the canopy where everything comes together, and a cap or ferrule can be attached to top the umbrella off.

O wie is for Ökotex

The Ökotex seal means that our canopy material adheres to the rigorous Ökotex 100 Standard. The quality is confirmed every year by an independent testing authority in Switzerland.

P is for Partner umbrella

Partner umbrellas from Knirps span over a meter in diameter, so there’s plenty of room for two people. They are available as both elegant long umbrellas and handy folding umbrellas.

Q  is for Quality

All Knirps brand umbrellas stand out for the high quality of their design, technology, materials, and workmanship. They are subject to ongoing internal and external quality control measures.

R is for Rivets

Each stretcher is divided into parts connected by rivets for flexibility. They have to withstand a lot of pressure, so they are exceptionally durable and made to exact specifications. The umbrella pros (like Knirps) use only stainless steel rivets.

S is for Stretchers

Look under the canopy of your umbrella to see the stretchers: strong bars extending from the centre like the spokes of a wheel. They push the canopy open and keep it taught so the rain rolls right off.

T  is for Trendy colours

Twice a year, Knirps brings out a new collection with the most popular colour and design trends. The umbrella with the red dot is always up to date. Just take a look at our trend umbrellas.

U  is for Umbrella

Umbrellas have a long history going back at least 5000 years. They were originally used as sun shades and for distinguishing high-status people. It was only in the late 17th century that umbrellas began to be used as rain shields.

V  is for Vent

Many large umbrellas – especially stationary sunshades – have a vent flap on top to prevent wind damage.

Quite a few of our Knirps umbrellas boast a “windproof” symbol. This means their stretchers and ribs are especially flexible to avoid wind damage. The canopy bends in high winds so these important components won’t break. We regularly test the wind resistance of our umbrellas in a high-tech wind tunnel.

The X1 is the littlest umbrella in the Knirps family. It packs up extra small and comes with a special pod case. As winner of the IDSA Award (USA), the Good Design Award (Japan), and the Best Design Award (New Zealand), the Knirps X1 umbrella is our most celebrated model.

In Japan, the land of umbrellas, you can get one for as little as 100 Yen – only about 90 US cents! These are the famous transparent plastic umbrellas called “binīrukasa.” They are available in any supermarket and don’t obstruct your vision – a big plus on crowded city streets. At that price, though, you probably won’t be carrying it for long.

Z  is for Zilch

Which is the amount of mould and mildew you want on your umbrella. So here’s a tip from the pros at Knirps: always leave your umbrella open to dry so you can enjoy it for many years to come.